'Jiu-jitsu helped me out of a really dark place'

-By Sam Laird, former Royal Marines Commando and co-founder of The Green Retreat 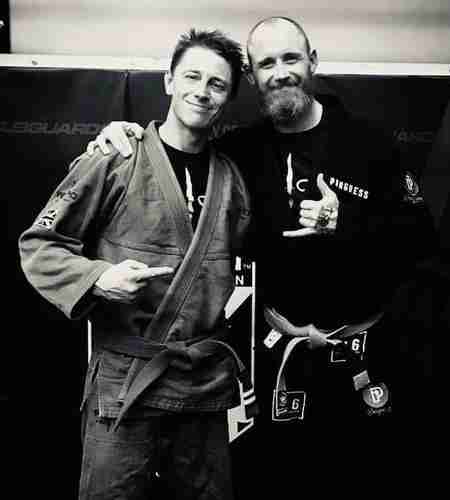 Ever since I started judo when I was 11, I have loved all martial arts. But in the last few years, my training has taken on a new level of importance, because it has been a vital part of keeping my mental health on track.

I joined the Royal Marines at 17 and did three tours of Afghanistan. Losing friends and comrades is never easy, and it definitely took a toll on me. Especially when we lost Sgt John Henry Manuel, who we all called Manny.

Manny was older than me and I knew him through martial arts before I joined up. I was just a kid when Manny was already a Marine and he really inspired me to become a Marine too. Manny was an awesome guy, a real father figure to me. He was killed in a suicide bombing in Afghanistan in 2008, and that was when my mental health began to suffer.

After operational tours I started drinking more and training less. When I left the Marines after more than 12 years, that is when I really started to struggle. The combination of depression and the loss of community from being out of the corps left me in a really dark place.

One of the main things that helped me out of that place was jiu-jitsu, along with my faith. I knew Sam Sheriff from my time in the Marines and the work he has been doing with REORG really inspires me. I forced myself to ask tough questions about what I enjoy doing, but also about what is good for me. I quit drinking and got serious about my training.

Jiu-jitsu has helped me out massively. There is always a really strong community around it, which is great for guys like me who found life after the military a challenge.

Also, it’s like a meditation, and it really takes you to a different place. It is very difficult to think about your problems when someone is trying to choke you out.

I am doing well now. My daughter means everything to me, and I am helping others out as much as I can. I co-founded The Green Retreat with my mate Stephen Lamb, another former Royal Marine. We are mentoring people to help activate authentic growth in their lives. I am also starting a mentoring programme with the Olympian and former BMX and track cycling world champion Shanaze Reade, so I have plenty to keep me motivated.

The lockdowns have been so tough on everyone. And jiu-jitsu is just one of many things that were taken away from us. But it’s important to be able to adapt, and I’ve managed to keep myself in good shape during the time off. And now I really can’t wait to get back on the mats.