The Armed Forces is more than just a job. When you sign up to serve your country, you are agreeing to put your life on the line. Anyone who went to Iraq and Afghanistan has experienced stuff that most people can’t even imagine. But focusing on the trauma gives the wrong impression of what it’s like in the military. I loved my time in the Royal Marines, it was leaving that caused problems.

I signed up at 16, straight from school to the Marines. It was everything to me, it was my job, but it was like a family too. It’s difficult to explain how close you get with your brothers in the Corps. Knowing that these are the mates you trust with your life is such a powerful thing.

The bond with your fellow Marines is massively important, but so is structure. Whether you are at the base, or on deployment somewhere, it doesn’t matter – one way or another you are always on a mission. You are on a course, or doing jungle warfare training and preparing for your deployment. There is always an arrow pointing forward.

I didn’t want to leave, the Marines, but I had leg injuries that meant I was facing either a medical discharge or a desk job, neither of which appealed to a frontline Commando. When I left at the age of 29, it’s pretty obvious I was properly institutionalised – I didn’t know any other life. But if I’d learnt one thing from my military training, it is how to get your head down and push on. So things seemed okay, for a bit.

Then a few years ago I struggled with my mental health, to the point where I was in bits and ready to end it. People might think: military, firefighter, it must be PTSD. But it wasn’t, not with me. My issues were with adjusting. Yes, I saw horrible things, but I made my peace with that. What I hadn’t made peace with was becoming a civilian.

I sometimes can’t believe how I sound when I talk about jiu-jitsu. I am always one to be sceptical when people start talking about some magic for your problems. But for me starting jiu-jitsu was such a lightbulb moment that I can’t stop going on about it. I’ve recruited a few people, from the fire service and outside, because the transformative effect is just incredible.

The feeling you get after a good training session is the closest I’ve felt to being back in the Marines. Just how you feel physically exhausted, but also with that feeling of satisfaction that you are working towards something, training with a purpose, like you do in the military.

My wife has totally noticed the difference that jiu-jitsu makes, to the point where if she sees me looking a bit grumpy she’ll ask when I’m going training. I’m in my forties now, so the age where it’s very easy to let yourself go physically. But with jiu-jitsu I don’t even have to think about that – it is so fun I will train as much as my life and my body allows.

I will always value the time I had in the Marines, and the guys I knew when I was serving. But jiu-jitsu has allowed me finally to adjust to civilian life, giving me a whole new focus, and a load of new friends. We might not be going off on foreign deployments together, but the time we spend on the mats is worth more than I can possibly put into words.

Ben was talking to Richard Holt. 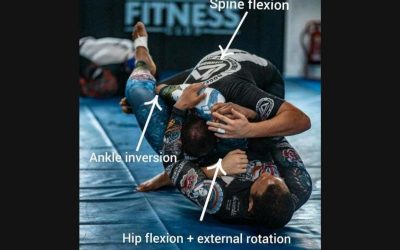 By Lawrence from Rolls and Rehab, injury rehabilitation therapist and mobility...

3000ft rope climb was a painful challenge I won’t forget

By Sam Sheriff Some challenges are a lot tougher than you think they will be. But because they’re...